I woke up at 5am, finished packing the bag, had brekky at 6am with Rosa and Luis, paid for my stay and the awesome horse-riding day and left around 7am.It was a gorgeous day with an amazing blue sky, at least at that hour!

Bye-bye Posada Sierra Nevada and the snow on Ritacumba Blanco I didn`t see. It gives me a good reason to come back..one day!

I stopped at the post of control to make sure the guy wrote down I was exiting the park so they would not send some rescue after me! And I started walking. The landscape on the way was beautiful and the weather quite warm, I was hiking in T-shirt again.

The full moon was there, above that unique piece of pine trees. 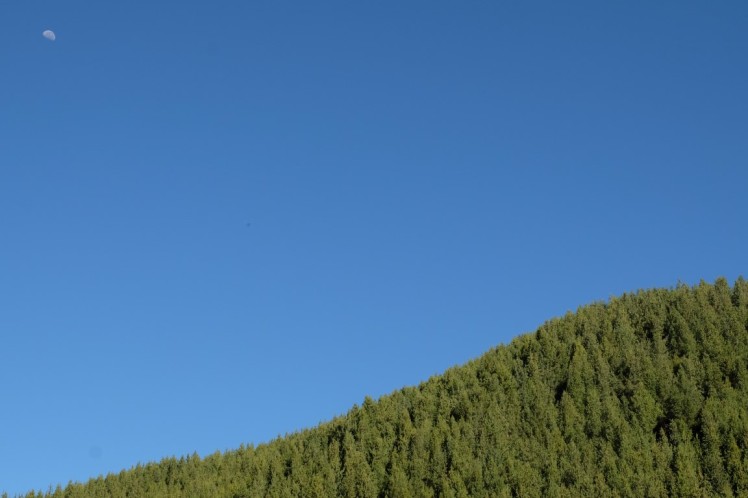 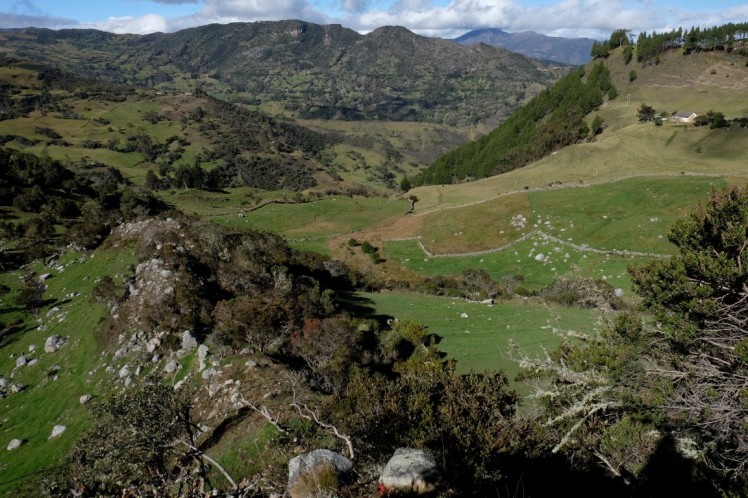 I was pretty fast going down, I arrived at 8.15am at the crossing. The lechero would only be here at 10am, so I decided to hike down in the direction of Guican until the lechero would pass me. Nice landscape on the way down. 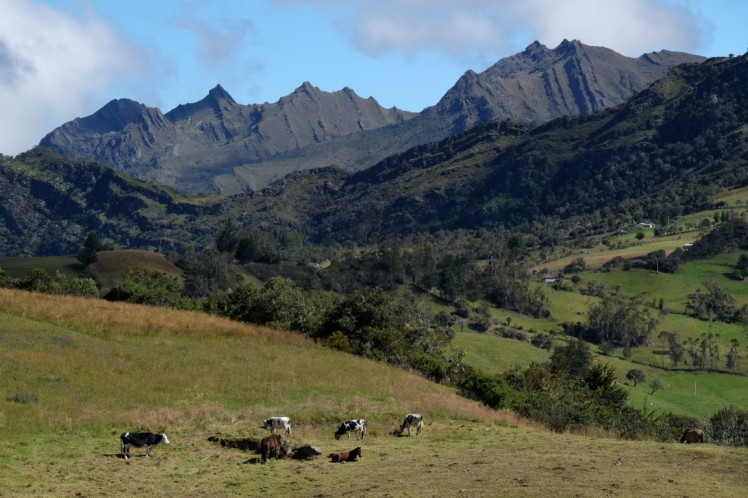 This cow was blowing its nose by putting its head down and blowing. Have you ever seen a cow blowing their nose? Pretty funny. 🙂 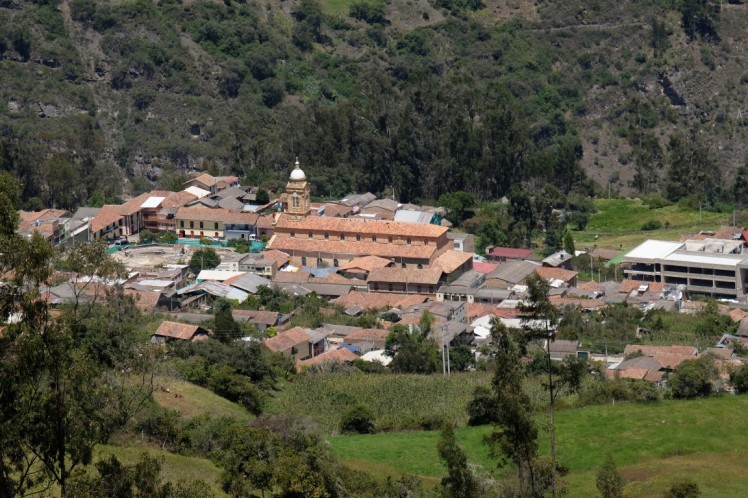 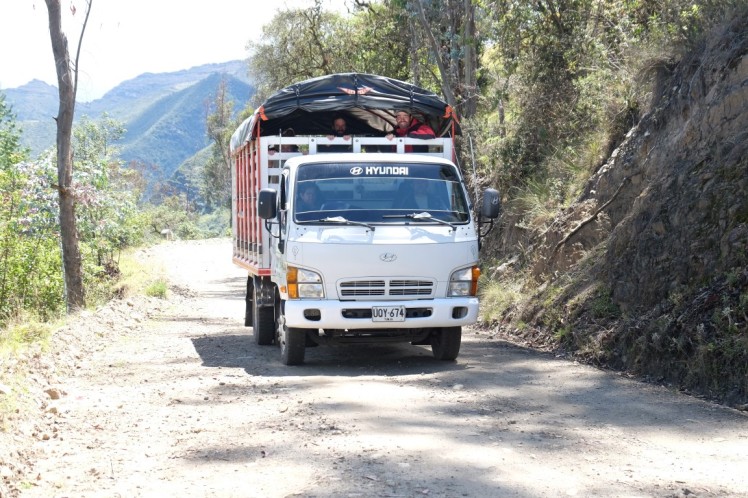 And in the lechero were Santos and Flavius, who had taken it from the post of control near Cabana Sisuma around 7.30am that morning. For that, they had walked from Cabana Sisuma to the post of control for a good 2 hours. It had rained so much the night before that they had to take their shoes and pants off to cross ponds where the water was reaching above their knees! Crazy how the weather can change in a few days.

11.20am, our arrival in Guican, view from the lechero.

Another view, once off the lechero. 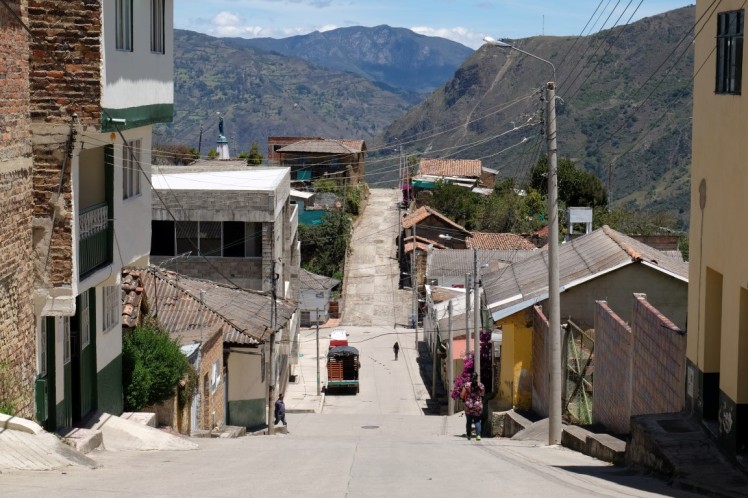 There were many people in front of the Palacio Municipal. We were told that various people were selling some of their land to the Parque Nacional and the prices and contracts were being agreed and signed that day. Important day in the life of some of the inhabitants of Guican.

Flavius went to his hotel to have a shower, I went with Santos to his hostel to drop my bag. Santos went to call his family from a phone, I went to visit the church while waiting for them. 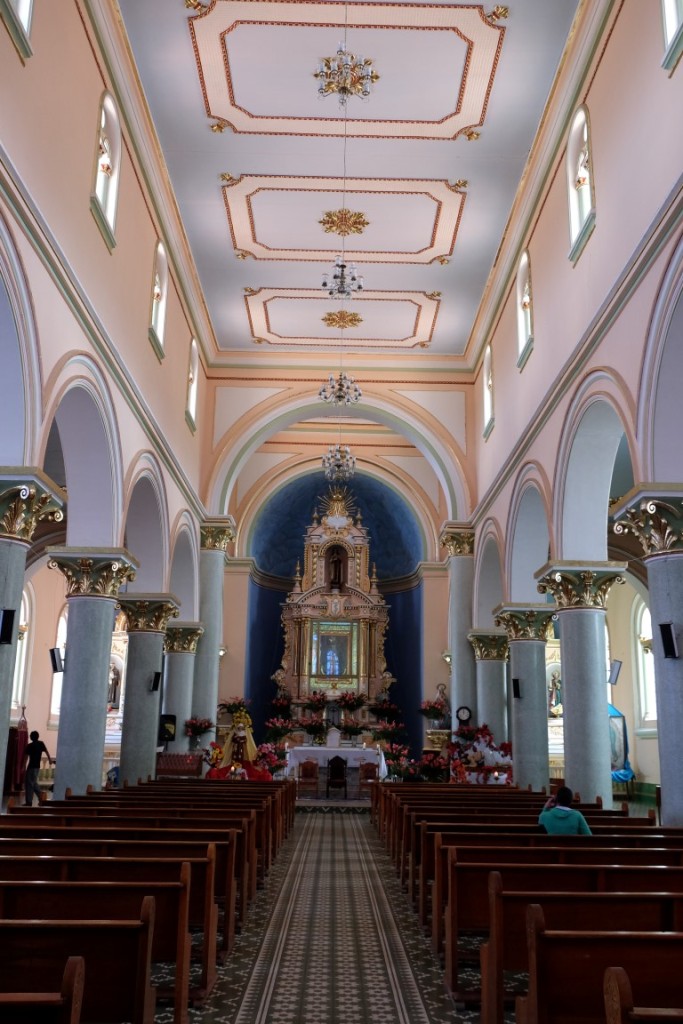 The church of Guican is quite particular because the Virgin Mary is black. The story goes that the Uwa tribe found her in a cave and she was black. I can`t help thinking the Uwas tribe probably has its own religion so how come they found the Virgin Mary but when it comes to religion, I guess everything is possible. 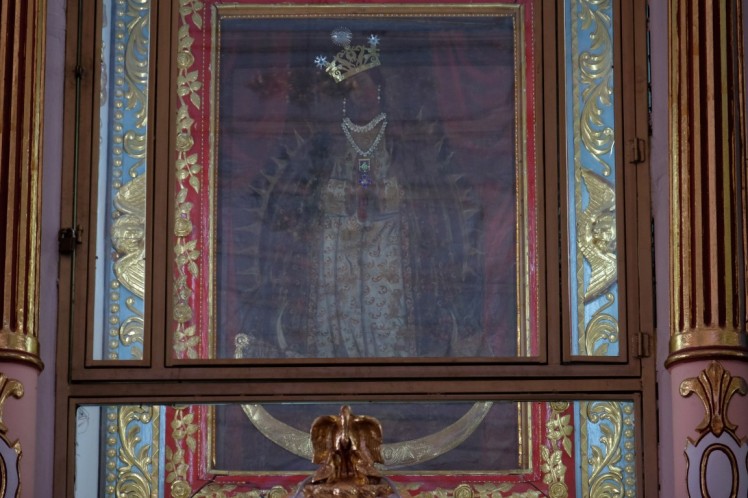 Found that little billboard in the church, witty.

First thing we did once we regrouped was…to have a beer!!!! As we all had drunk no beers at all for a week. Choices were Colombia Club, Aguila, Aguila Light, Poker, Costena. It was refreshing to sit on a bench outside, watching the main plaza and the people go by and sip our beer. Santos had made friend with literally the entire town before to go hiking, it was so funny to see him say hi to everyone. It created a nice atmosphere where everyone knows each other. View of the plaza which is being renovated and the church in the background.

We had lunch in a small place where you pass the door, climb up the stairs and enter the kitchen of the place where you sit at a table and they serve you food. Interesting little place. 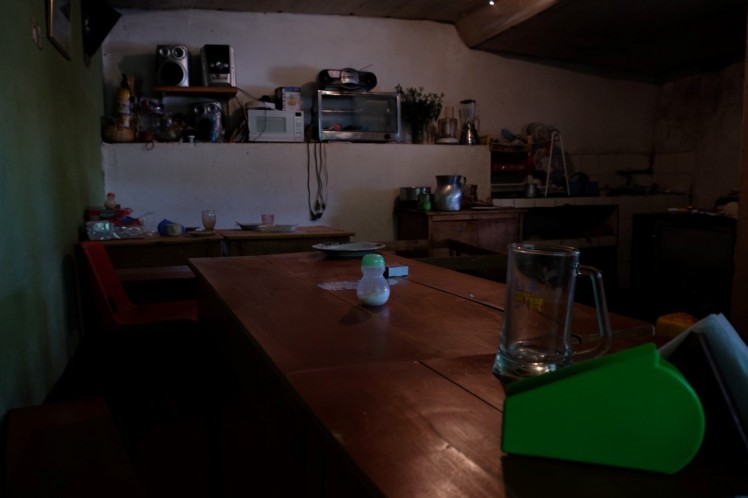 After lunch, we went to another place where we had a tinto (black coffee). Then we decided to head to the Queseria, the Cheese Factory to discover what they did with all this milk they were collecting with the lechero.

A woman welcomed us and through the windows we could see a few people working and transforming the milk into cheese.

That guy is working the cheese paste and then splitting it into in small blocks he puts on the right which will create a single cream cheese. 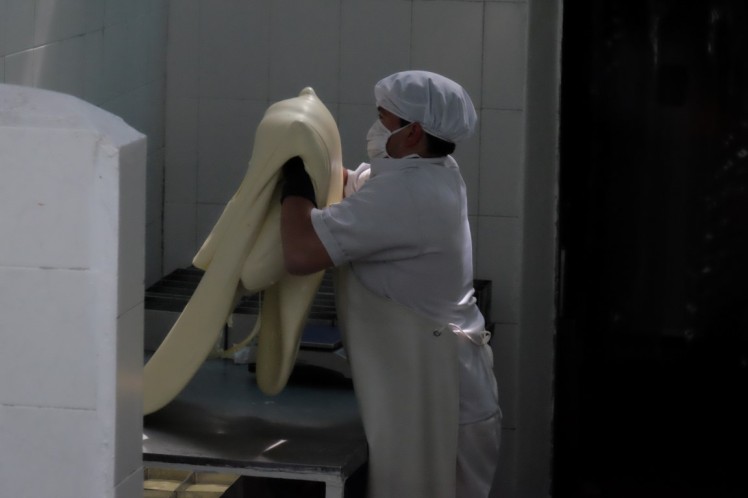 The woman explained to us that first some synthetic little pill was put in the milk to split the liquid from the cheese paste. Traditionnally, it is some stuff from the cow itself that is used to do that, but nowadays they use some synthetic pill instead. Then the cheese paste is worked on and somehow it helps make the cheese. I didn`t follow the entire process to be honest, it was all in Spanish and she spoke really fast. What I remember is that 18 people work there and they receive about 7,000 liters of milk each day which is used exclusively to make 2 type of cheese, the single cream one and the double cream one. It helps to make maybe 20,000 cheeses. Those cheeses take 2-3 days to become cheese by being left at the ambient temperature. Then they are exported to Bucaramanga and Bogota and from them on redistributed. Voila!

After that visit, we head to a hostel called Guicani where I wanted to buy the topographic map of El Cocuy which can not be found in El Cocuy itself or Bogota or other places and therefore is a very holy unique precious map to me! On the way to getting the map, we ran into that cool scene of 2 dogs watching the landscape while 2 old men were sitting on a bench in a street chatting.

Going up the streets.

We stopped at the Panaderia to get some special Guican delicacies.

I got a quarter of this cheese which is tasty and wrapped in some leaf.

After that, we continued our little tourist tour by heading to the Parque Nacional Office where they were screening a movie. On the way to there, we saw this scene where the man was going up the ladder to paint with a pressure painter thingy.

Inside the Parque Nacional Office, we watched a small movie about El Cocuy National Park. It was really nice to see the different places we had hiked, I asked to watch it twice! 🙂 At the end, the woman gave us a survey to fill about our experience in the park. We were joking with Santos and Flavius that we were passing a knowledge test about El Cocuy and that if we failed, we would be sent again to spend 6 more days in the park hoping that the second time we would pass. Flavius is a Sport teacher in a secondary school in Belgium and on 1st September he will be making his school students who failed in June try to get their year. We joked that he had to call the school superior to tell him he was stuck in Colombia because he had failed his El Cocuy test and would have to pass it again and be delayed before he could go back, had a really good laugh keeping going on that topic! In the Park office, there was this saying from the Uwas on the wall.

After that, we decided to go get a second beer. On our way, we saw this cool old bus.

While having our beer, Flavius pointed to me about the toilets located in a corner of the place. I had not noticed that yet!

Another fun truck outside of the tienda (shop) where we had a beer.

View of a street, in the sunny and warm day. 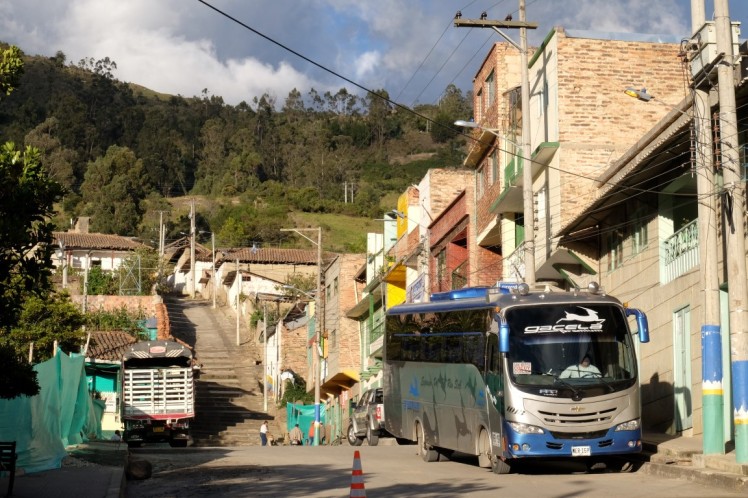 View of a cloud from the hostel of Santos where we headed back as Flavius had also dropped his bag there at some point. 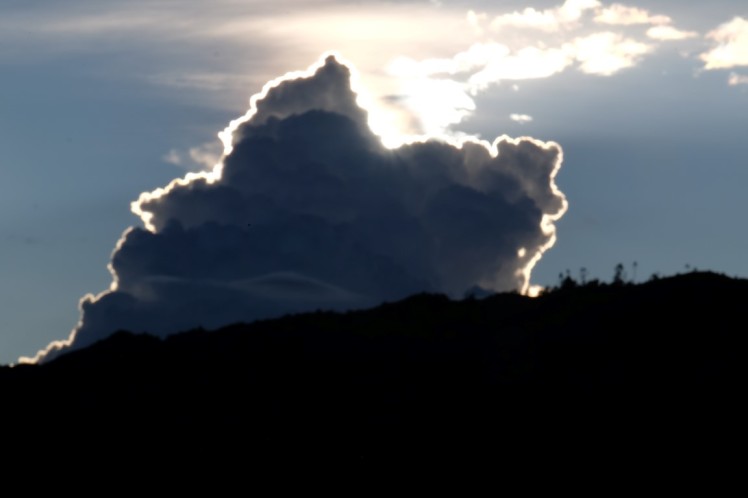 Flavius was taking a 6.30pm bus to Bogota, Santos a 3am one to Bucaramanga and me a 6.30pm one to El Cocuy to stay one night there, grab my stuff, have a shower, get rid of my dreads, and then head the next morning away.

The night fell, the 6.30pm bus to El Cocuy was not arriving, so I took the one for Bogota that Flavius was taking which dropped me in El Cocuy.

In the evening, I met with Elodie and Yassine, a French couple living in Paris who were about to go to El Cocuy National Park the next day. They had travelled a lot around South America already and it was awesome to get their tips. Then I had a warm shower and spent a good hour brushing my hair to undo my dreads! Took long! Repacked the bag, went to bed.