We woke up at 5am and had some brekky at the hostel.

Then we headed to the bus and started queuing at 5.50am. The queue was going until the bridge.

While waiting in the queue, we were reading the menus, funny how the write Spaghetty and other words. 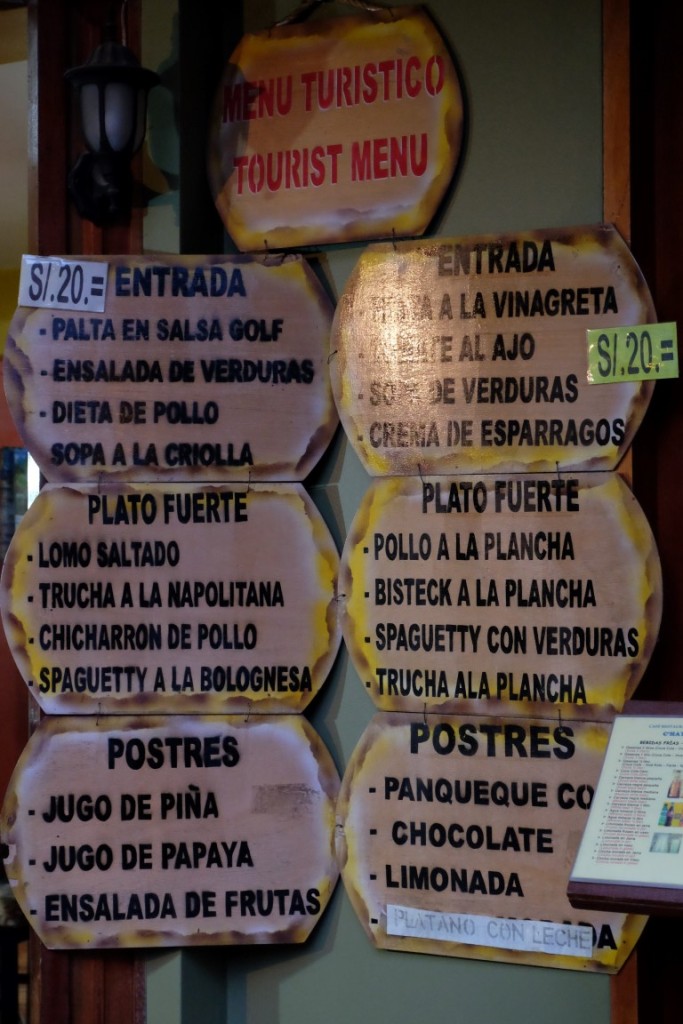 There were not many people queuing to buy tickets as most people buy them the day before between 2pm and 9pm.

Same for the sandwiches apparently. We had bought them the day before thinking that everyone would buy them in the morning and that there would be none left but there were plenty left. Or maybe people were afraid that they would be confiscated at the entrance and therefore had not bought any and planned to eat near the entrance in the restaurant instead. In reality, they don’t check the bags (at least those 2 days where we went!) and people can go through with plastic bottles and food.

Beautiful mountain while waiting for the bus 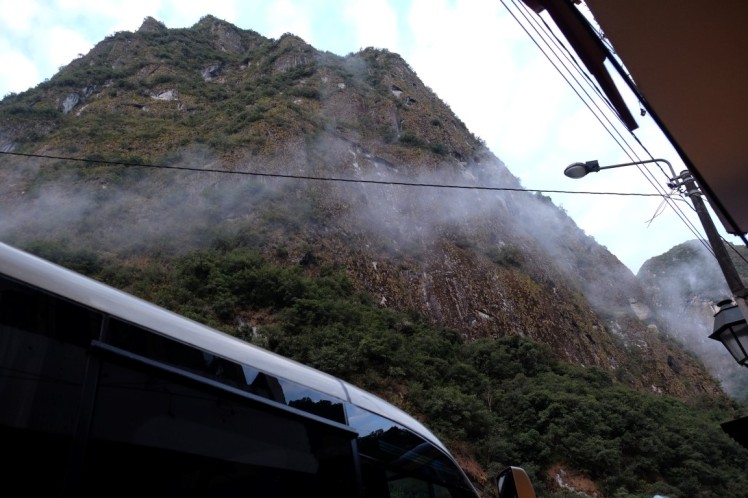 Almost there. That dog just doesn`t care that many people pass right next to him, he carries on sleeping.

And here we were in the bus already, after 30 minutes queuing only. The logistic is pretty good. We were not in the first batch of 12 buses going up, but in the first few buses of the second batch. The road up was beautiful again, the windows were just a bit foggy.

Got there and the queue was longer, of course, it is Machu Picchu, and it is the early morning! And it is mid-August!

Looking back when almost at the entrance. Many people hey! Saying that, again, it took us literally 15 minutes between the moment we arrived with the bus and the moment we passed the gate. There are 4 gates and a pretty good logistic here too. 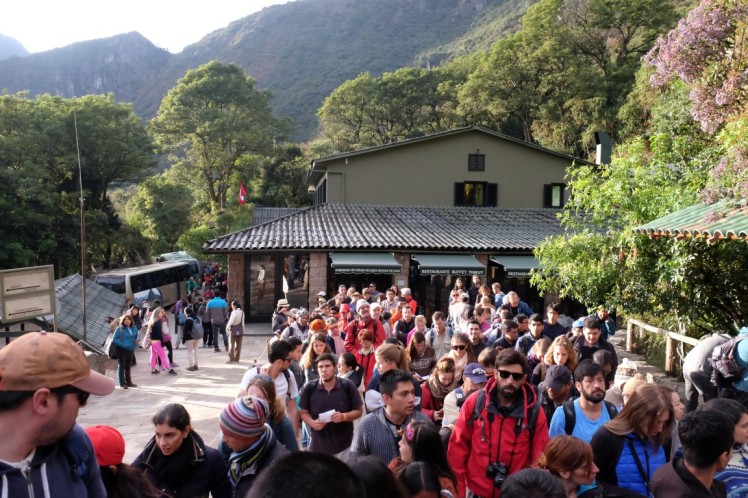 Beautiful view on the right.

Even just this view makes it worth going to Macchu Picchu!!

Walking up to the postcard shooting point. Yes, lots of people walking there as this is either that road up or another one, not many paths at the beginning. 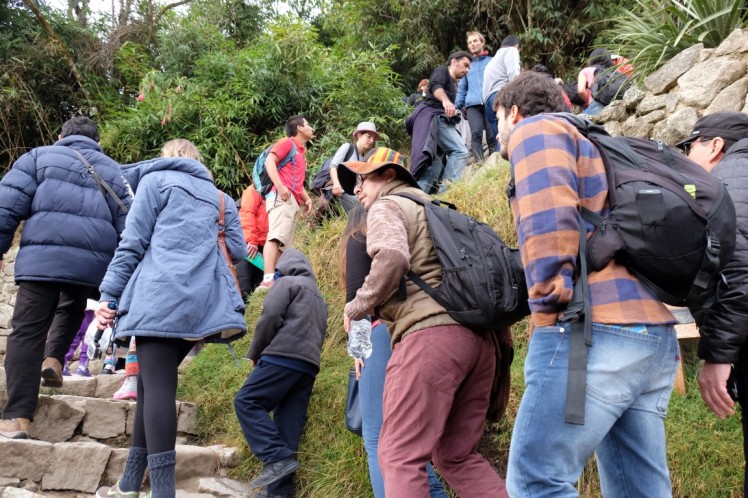 Looking down at the people behind us.

We get to the postcard photo spot where people are lining up to take the shot.

The good thing with Macchu Picchu though is that there is space and everyone can line up and will have no one on their shot of that beautiful postcard perfect picture I took yesterday. Taking it again from a bit higher up.

We take the path again towards the Puerta del Sol but turn right to Montana Picchu this time.

We pass the checkpoint. Only 400 people are allowed to climb up to Montana Picchu every day, we booked those tickets in advance in May. Saying that, I heard a guy talking to another on that walk later on who said he had bought his tickets the day before! So some tickets are probably given to agencies for them to sell later on too! We were really happy to do the walk early morning when it was still cloudy before the sun shined and the weather got hot! At the checkpoint we had seen Fabien and Maryline behind us, they were quicker than us and we met them at the top again and chatted there while having snack bars and bananas we had bought in the morning and contemplating the 360 degrees view. They had binoculars with them and it was awesome to look at Macchu Picchu structure from above with them and also at the full path going from the checkpoint to the top of Wayna Picchu.

Here are the shots of our walking up the stairs to Montana Picchu between 7.30am and 9am.

leave with weird spots under 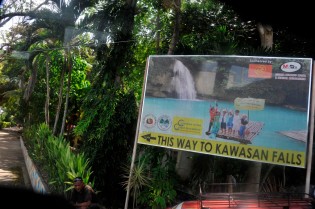 birds at the top

site seen from the top

Going down around 10am, beautiful view too.

We got down and ran into many people. It was very sunny by now and they were panting! We got back at the checkpoint around 11am, when the last people were being allowed in to go to Montana Picchu. Too hot!

We checked out by signing in the book that we had made it back. Probably a kind of safety book for them to make sure everyone comes back from the walk! 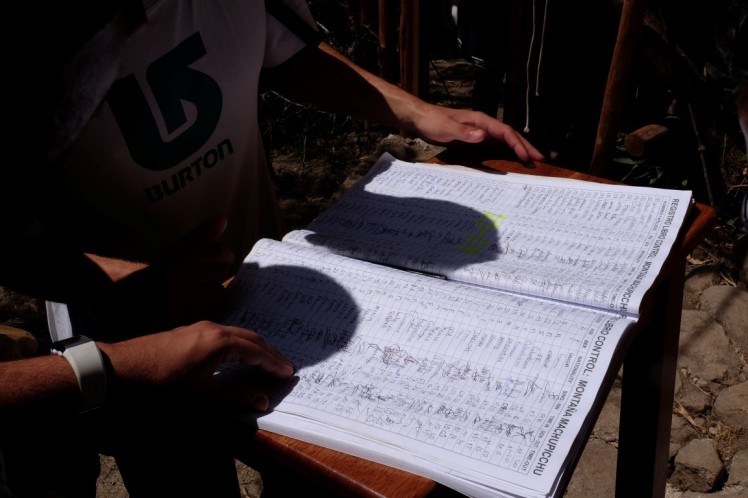 Back to the main site, view of some doors. 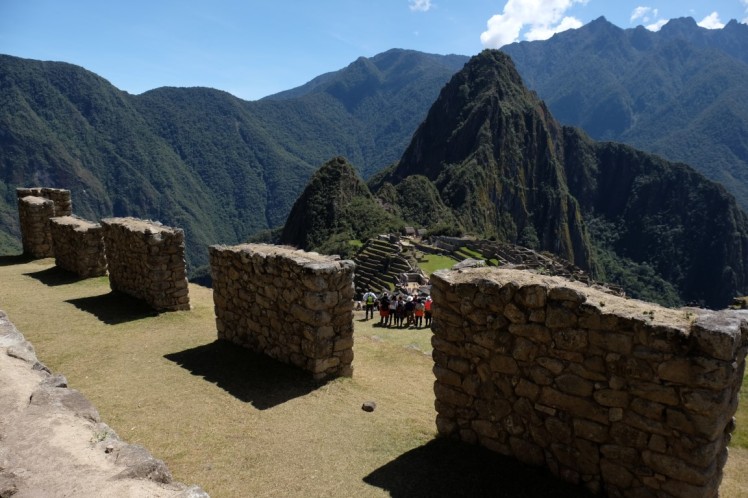 We walked back to the entrance, went to toilets and came back. Sat in the shade and ate our sandwiches. Then walked to the Inca Bridge. There we ran into Pauline and her husband and their 2 kids, 7 and 9 years old, living in Brittany, in France. They were travelling all over the world with their kids since the youngest was 3 years old. They had been with them to Nepal, Kirghistan, South Africa and now Peru! This was truly inspiring. Check out their blog here:

To reduce the cost as it was 4 of them travelling, they had taken a 7’hour bus and slept in Hydrau Electrica and then hiked about 7 hours all around Wayna Picchu to Aguas Calientes, which sounds like a very interesting hike too! There are hundreds of way to go to Macchu Picchu!

Photos of the walk and the Inca Bridge 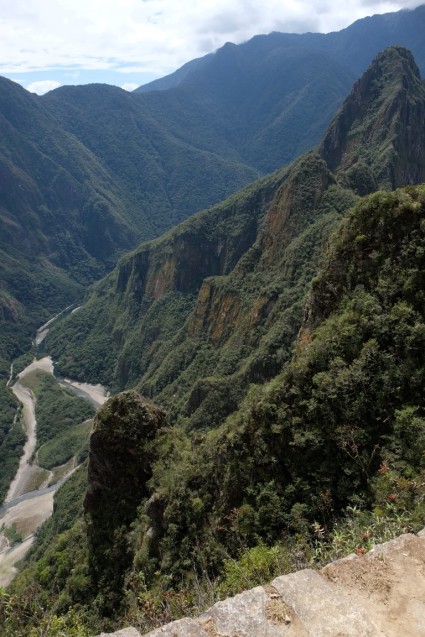 We walked around a bit more. I can’t get tired of this view! 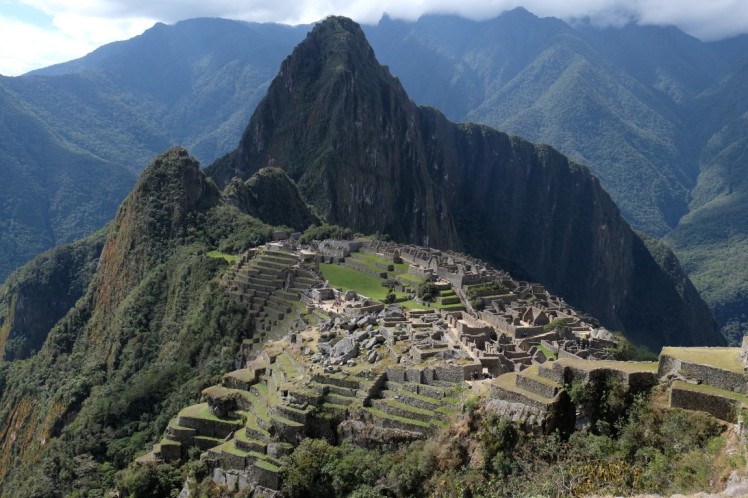 Last look at amazingly beautiful Macchu Picchu before to head to the bus.

If you want to hike down, the path with stairs covered with the trees goes straight there.

View from the bus. We were in there within 15 minutes. Again, great logistic so even if there are lots of people going, Macchu Picchu is a huge site where it is possible to go to some spots less crowded during rush hour and avoid the crowd on the main site by going there between 3pm and 5pm like we did the day before. Don`t let the crowd put you off and make you not go, it is worth it, whether you come by walk, by bus, by train…It is a truly amazing place!

View from bus while going down

At Cafe de Paris, we bought some Danish pastry and lemon tart with meringue. Yummy. 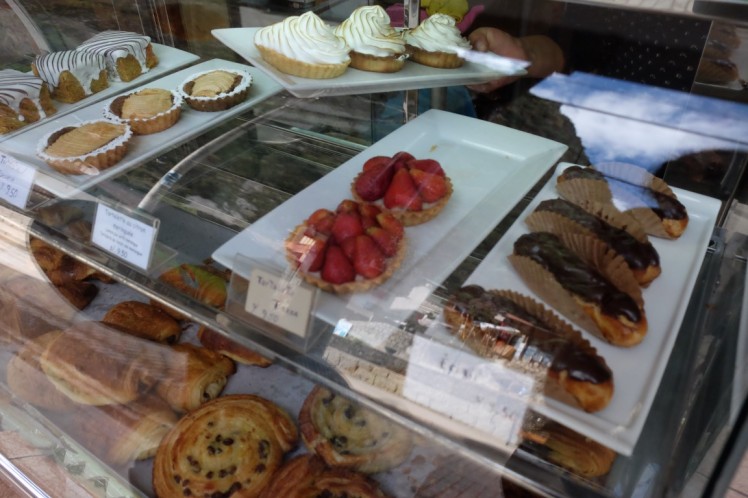 View of the river

Another plaza in Aguas Calientes

We walked to the hot springs entrance but decided not to go finally as we didn`t have much time and could not be bothered walking back to the hostel and grabbing the swimming suits and walking back. 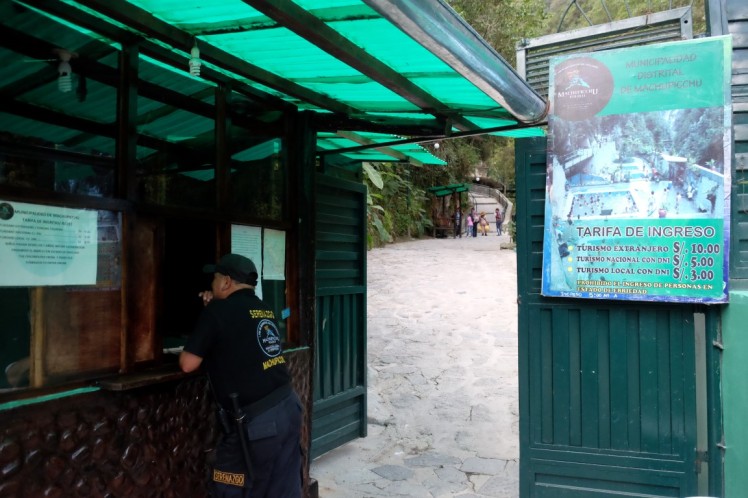 Instead we went to sit in a cafe and had another Pico Sour, alright two each. While enjoying our drink, it was raining! It reminded me how lucky we had been with Sebastian when it only rained when we had taken cover at La Victoria and then afterwards at Cafe Minca, during our walk from Casa Elemento down to Minca, about a month before! 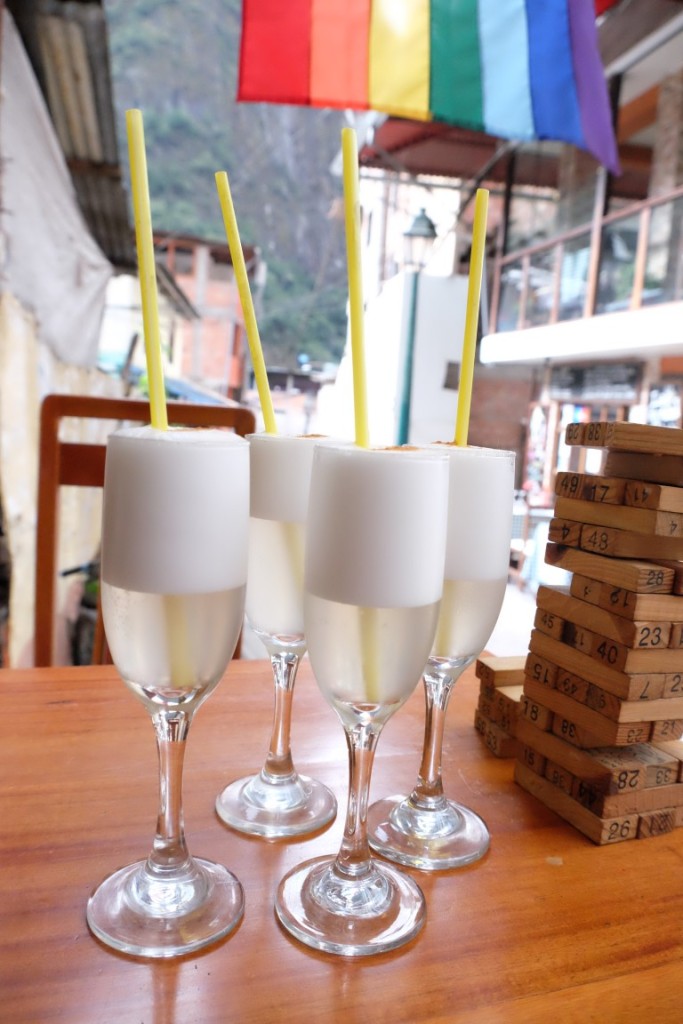 Then we walked to the train station and waited for the doors to open. We followed an agent we called “Mr B” as he was doing his job diligently of not loosing anyone and making sure we got to the right wagon!

At the entrance of our wagon

Bye-bye Aguas Calientes and Macchu Picchu! The train took off at 17h23 on time.

Most people were exhausted and sleeping. We were served some snack, with peanuts, ground cherries called also physalis fruits and some cake and some tamal.

Tamal is this thing made with couscous and something else, could be meat here it was olives.

The train ride was long, long…We wanted to arrive. At some point the train crew made some entertainment with this masked figure going around which woke up people a bit.

There was even a fashion show where a woman and a man came to show some beautifully crafted ponchos and jackets like this one.

Then they were selling them about 400 to 700 soles. It is a brand called Ethnic Peru which has a shop in Lima also.

We arrived at Poroy around 9pm and searched for the taxi who had dropped up the morning before. There were so many red Toyota Yaris taxis it was hard to find him. I looked at my photos and could see the number plate and we found the car but the driver wasn`t there so I stayed next to it and Anouk went to search for him and found him and off we went back to Cusco!

In the car, both Anouk and I started feeling sick. We couldn’t wait to arrive. About 2 hours later in the room, we started taking turns for the toilets!! Anouk’s body reacted by making her vomit and vomit again, even through the nose, which is quite unusual! My body reacted by making me have an uncontrollable liquid diarrhea all night and some vomiting too at the beginning. All night we took turns on the toilets, alternating!! I got really good at going from the bed to the toilets within seconds, if that sport was at the Olympic game, I would win it. Me usually slow, I was the fastest you can imagine when it came to this emergency!!!! As I had not really travelled the world the past 3 years, apart from going back to Europe to see friends and family, it was the first time I was having this tourist diarrhea again in 4 years, since Phnom Penh in Cambodia! Smecta, Tiorfan, Coca-Cola, Gatorade, Tea, Rehydration drink, hot bottle, and lots of toilet paper became my best friends all night fighting back to get rid of it. Was that the Pisco Sour? Was that the tamal? the fruits? just the exhaustion, the train ride? everything combined? hard to tell!